Can design make a difference?

Having personally established a career in the charity sector, Michael Johnson’s statement “forget about lunch if you’re working for charity” holds true with me.

I made a 6-hour trip to London to attend a talk by a designer, Michael Johnson, founder of London based agency johnson banks. The event was hosted by The Typographic Circle, as part of a series of talks throughout the year. Michael Johnson is a designer in the same ballpark as Paul Rand and Bob Gill in my opinion, so it was one I couldn’t miss. Just search his work for Anthony Nolan or Cystic Fibrosis Trust and I’m sure you’ll agree. The difference between Michael and other acclaimed designers is possibly his philosophy for pursuing a meaningful career. Paul Rand’s IBM logo was a touch of genius, but what was the point? Did it really change anything?

Even while studying design, I have always questioned its purpose. Are we merely here to make a living or is there something a bit more worthwhile to our chosen careers?

I thought it was a bit ironic that Michael started his talk by saying “one poster cannot change the world”, and then seeing a queue form at the end, after a lengthy applause by designers and students wanting to get their hands on a limited edition signed poster (I was one of them). Looking at the johnson banks website, you’ll see that it’s littered with posters. Perhaps a poster can help change the world, but it depends on what the poster is trying to say.

If you’re a design graduate thinking about a potential sector, lets get this straight, in our current climate you won’t get rich working in the charity sector. You probably won’t even be able to afford a house, a car, or in some circumstances rent. Forget winning awards too. Michael noted a ted talk by Dan Palotta, who has a vast knowledge of Philanthropy and the work that charities do.

This quote by Dan may help sum up the above. “You want to make $50 million selling violent video games, go for it, we’ll put you on the cover of Wired Magazine, but if you want to make half a million dollars trying to cure kids of malaria you’re considered a parasite yourself”. Watch the entire talk in the embedded video below.

It was interesting to see that a £1 million investment in design and marketing by Macmillan Cancer Support led to an increase of £20 million of donations. I overheard Michael saying that he believes professionals shouldn’t be paid differently by working on charity or commercial work. After all, the investment clearly pays off.

During Michael’s talk, he mentioned the First Things First Manifesto. Its aim is to stimulate discussion in all areas of visual communication – in education, in practice, in the organisations that represent design’s aspirations and aims – as well as outside design.

Many young designers have little conception of the values, ideals and sense of responsibility that once shaped the growth and practice of design.

It’s well worth a read for any inspiring young designer, or even the established ones. I chose this sector on a self-initiated, conscious basis, but should it be at the forefront of our education?

The big problem though, if all designers started having a conscience, would there be enough work to go around? Even Michael noted the work his studio does for the likes of Virgin and More Than. He said that working for the ‘blue chip’ organisations helps to fund his work for the charities and non-profits. “80% of their work is good / 20% pays the bills”.

Could we self initiate work to solve design problems? A philosophy that was adopted by Sea Communications and Dott Cornwall called the Big Design Challenge. Now branded as Shaped.By.Us in partnership with Cornwall Council. “Shaped By Us is an exciting new way to get involved with solving problems in your local area that can help to improve the lives of your family, friends, neighbours and communities.” This is great on a local level, but could it work internationally to help solve some of the world’s major problems? Could there be collaboration on a global scale?

For ShelterBox I created a series of posters to go on the back of some buses in New Zealand. They’re not going to win any awards; they may not be typographically spot on nor have a uniform grid. But as Michael questioned, will a grid and a typeface help to change the world? The purpose of these posters is not to ‘flog fizzy drinks and trainers’; it is to raise awareness and funds to support a charity helping others. A charity that provides emergency shelter and lifesaving supplies for families around the world who are affected by disasters, at the time when they need it the most.

Looking around the room during the talk last night, you couldn’t miss looking at people with their mouths wide open, transfixed on everything that was being said. Clearly it was sinking in. It would have been interesting to see how many of the attendees are working within or for the charity sector, and how many were actually working for BT and Nike.

Was the talk last night a rallying cry for the design industry? Can we change the culture in which we operate?

We need to ask ourselves, do we need any more designer chairs? 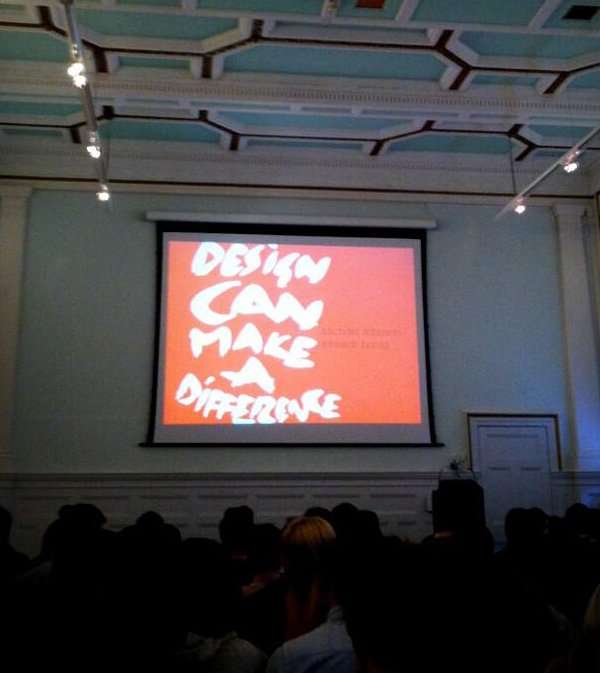 Our creative agency with a conscience.

A busy first week at Ridgeline

What’s in a name?

Our creative agency with a conscience.

A busy first week at Ridgeline

What’s in a name?